• Those who have mineral oil license within the scope of petroleum law no. 5015 and taxpayers who have a turnover of 25 million Turkish Liras or more in 2011 calendar year,

- Skipped numbers should be canceled if your software allows it.

- It is necessary to give a petition explaining the situation to the related Tax Office Directorate. You can continue issuing new invoices using the same serial number without skipping the last invoice number and using the consecutive numbers you omitted. The e-invoice application is subject to the same provisions as the printed invoice.
You should notify the Administration about interruptions in the system that do not exceed two days and the reason for the downtime by sending an e-mail to efatura@gelirler.gov.tr.
Taxpayers who use the e-Invoice application are obliged to send and receive e-Invoices to registered users after 7 days following the activation of their accounts. Companies newly registered to the e-Invoice application are obliged to issue and receive e-Invoice after 7 days following the declaration in the 'Registered Users List', but other registered users are not obliged to send e-Invoices to the newly registered users within this period.
e-Invoice is an invoice application in which data formats and standards are determined by Revenue Administration (RA) and invoice exchange is realized through the RA system. The required elements included in an invoice according to Tax Procedure Law are the same for e-Invoice and e-Invoice is not a new type of document and has the same legal qualities as the printed invoice.
-Companies that transition to the invoice application within the scope of the obligation or voluntarily are required to make an electronic application at www.efatura.gov.tr.

It is mandatory to specify the method that will be used for the e-Invoice application in order to be able to use it.

There are three methods to use the e-invoice application:

- Using the RA e-Invoice Portal: You can send and receive e-Invoices using the internet-based RA e-Invoice Portal. This method is not very convenient for mass invoice submissions. Therefore, it is suitable for companies with relatively lower invoice traffic.

- Using Private Integrator: The e-Invoice application is utilized by using the Information Technology Systems of companies who acquired private integration permissions from RA.

Regardless of the method that will be used, an electronic certificate to be used for e-Invoice approval must be provided prior to the application.
The e-Invoice is subject to the same rules as the printed invoice. According to Article 215/2-a of the Tax Procedure Law; ‘Turkish currency is used for all registration and documents. The documents may also be issued in foreign currency, provided that they are shown in Turkish currency. However, documents issued on behalf of customers abroad are not required to display the amount in Turkish currency.’
If the retailer and the receiving party are both registered to the e-Invoice system, the issued invoice must be issued as an e-Invoice.
In the Official Gazette No. 27512 dated 5 March 2010, the procedures and principles regarding the Electronic Invoice Application have been determined by the publication of the General Communiqué No 397 Tax Procedure Law. Electronic certificate/electronic signature is mandatory in the e-Invoice application. Taxpayers who want to use the e-Invoice application using the portal method are required to log in with the electronic certificate/e-signature.
As stated in the Private Integration Guide, the updated list of current registered users for mailboxes is published at https://merkez.efatura.gov.tr/EFaturaMerkez/userList.jsp. The web service where registered users can be queried is only available to users who are integrators.
The Administration plans to have the registered user list updated at specific intervals. However, currently no time intervals and effective dates are set.
With the upload mechanism, uploads can be done as specified in the portal user manual. Each invoice must be created in .xml format and multiple invoices sent to one recipient can be sent in a single envelope.
Taxpayers who wish to use the e-Invoice Application by the integration method may request that their portal accounts not be created until the integration process is completed.
Taxpayers are not obliged to submit their e-Invoices according to a single invoice scenario. They can send e-Invoice to their customers using commercial or basic scenario types. Accordingly, some of the created e-invoices can be commercial and some of them can be basic scenario types.
Any company may make transition to e-Invoice. You can voluntarily transition to e-Invoice even if you are not within the scope of the mandatory e-Invoice transition determined by the Revenue Administration (RA). In short, there is no turnover restriction for companies willing to voluntarily use e-Invoice.
Within the scope of application, the company has to start using e-Invoice within 7 days after being published in the list of registered users. You have no responsibility during this time if no transaction that requires the issuance of an e-invoice happened and no electronic invoice has been issued. After 7 days, e-Invoice must be issued to all taxpayers whose names are listed in the registered users list.
In mergers, the legal entity of the company to be absorbed will be abolished. In such a case, a petition must be sent to the Revenue Administration with legal documents indicating that a merger has taken place. The e-Invoice application and the obligation of use for the company whose legal entity has been abolished will be terminated by the Revenue Administration.
Technically there are no mechanisms that prevents the e-Invoice from being issued retrospectively. The legal responsibility of the time period belongs to the companies.
It is not enough that the RA received the invoices. The invoice process is completed when the sender receives confirmation that the invoice sent reached the recipient’s mailbox. System responses and invoice status need to be checked.
Commercial invoices must be responded to (Accept / Reject) within 8 days. Invoices without a response are deemed accepted by law. If the commercial invoice is not rejected within 8 days, it will be considered 'Accepted':

- You can issue a return invoice if the situation COMPLIES with the provisions of the legislation.

- You can object to the invoice using external channels.
When you issue an e-Invoice, you can select the 'Withholding Invoice' invoice type and then add 'Corporate Tax Stoppage' item to the goods service items.
No matter what method the taxpayer company is using, they have the responsibility of keeping and declaring the e-Invoices. This obligation cannot be transferred legally or financially. Our recommendation to companies that became e-Invoice taxpayers with private integration method by signing a contract with a private integrator is that they retrieve their archives from their private integrator on a 6 months or yearly basis and keep them in their own environments. On the other hand, RA Portal users should download their e-Invoice backups from the portal quarterly and back them up in their own environment.
They are system messages in the e-Invoice application that contains the invoice or application response coming from RA and receiving systems and the process status of the envelope with the code included. The information that an invoice or application response has been successfully received by the end user through RA is forwarded to the sending system along with these documents.
All the UBL invoice, application and system responses sent are carried in an electronic document holder called an envelope. All envelopes contain the sender and recipient information (tax ID number-TRIN and tags), as well as the identifier number (UUID-Universal Unique Identifier) and creation time of the envelope.
It contains the tax ID number/TRIN information of the taxpayers registered to the e-Invoice system along with the system addresses that are divided into two as Sending Unit and Mailbox. Invoice is only sent from the Sending Unit (GB) tag (e.g. defaultgb@companyname.com). Mailbox (PK) tag (e.g. defaultpk@companyname.com) receives e-Invoices and sends application responses to incoming invoices. Taxpayers may have more than one GB or PK tags for the same tax ID number or TRIN.
Contact Us
e-Invoice
e-Ledger
e-Archive
e-Dispatch
e-Reconciliation
e-Analysis 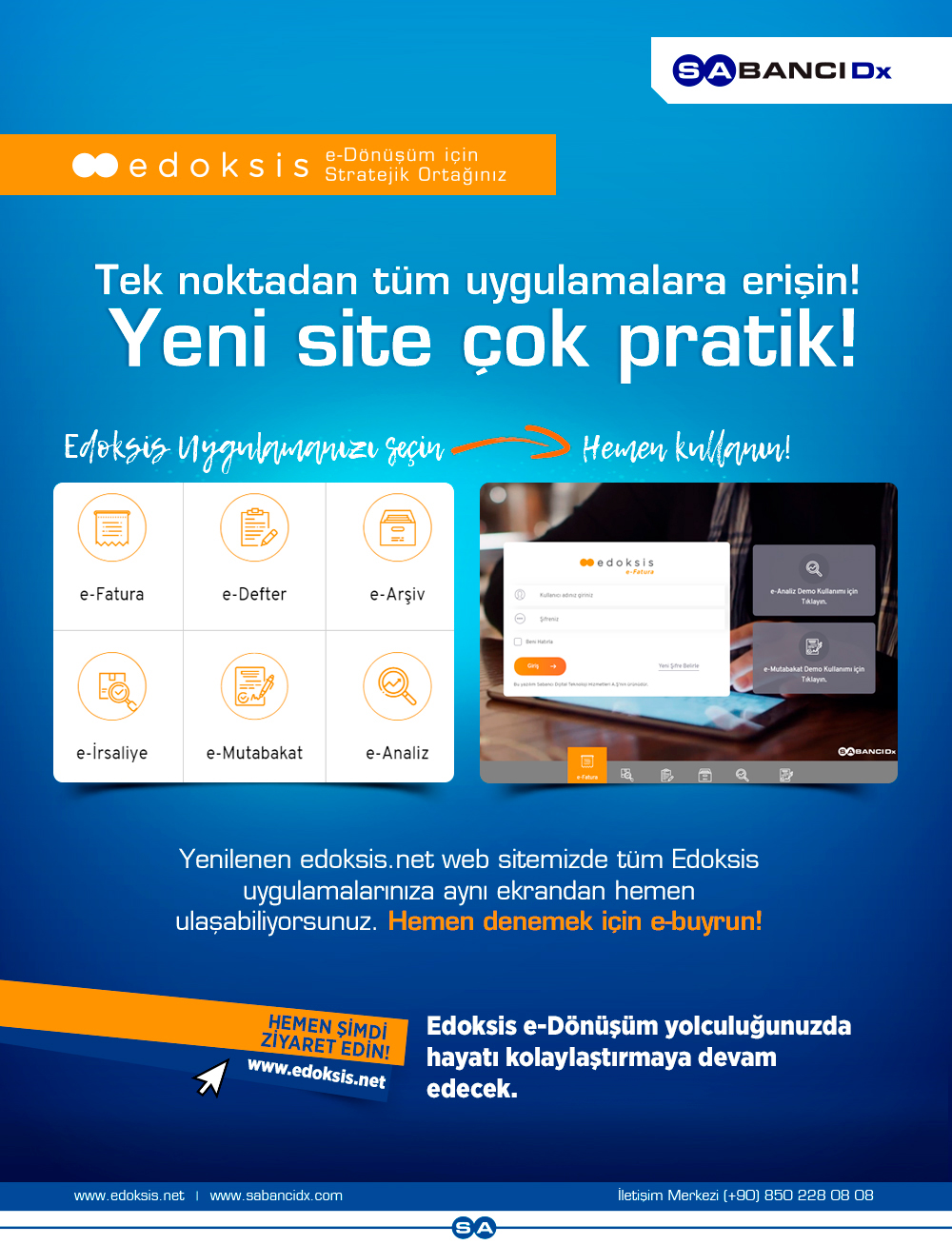